A cleanroom bears its name for a reason: its very purpose is to stay sanitary and free of contaminants to maintain a stable work environment. Because employees handle sensitive equipment and components in these critical areas, keeping contaminants at bay is essential to everyday workflow, and ultimately, maintaining profitability.

It may come as no surprise that your employees are the most common source of contamination in your cleanrooms. What you may find surprising, however, are the simple steps you can take to minimize contamination risks. Let’s take a look at some of the most effective tips, below.

Humans naturally produce particles. Our bodies shed contaminants, producing detritus like skin flakes and particles from hair products, cosmetics, and lotions. Thus, while good hygiene can limit the level of contaminants spread in the cleanroom, it’s also important to consider ways in which certain steps of getting ready might be skipped or altered for the purpose of limiting contaminants. Even perfume and cologne, for instance, can produce contaminants. Since 75-80% of particles found in cleanroom inspections are produced by personnel, it’s a good idea to establish a set of hygiene recommendations for your employees to follow.

A good portion of cleanliness violations result from bare hands touching surfaces, then transferring these particles onto garments before they enter the cleanroom. To make sure your employees aren’t contaminating anything that will be worn inside your critical environments, consider installing no-touch sensors in the areas where your employees don their cleanroom gear. This will allow them to still wash their hands without picking up any excess particles in the process. Cleanroom Gloves are used in areas that have specific requirements for low contamination ris 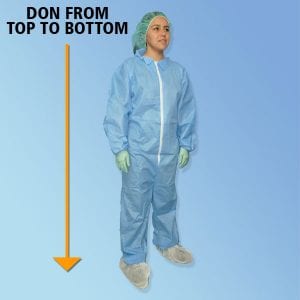 Tyvek Coveralls should be donned from top to bottom to eliminate cleanroom contamination. Get Tyvek Coveralls at Harmony Lab.The way your employees put their disposable apparel on is just as important as the garments themselves. Because particles are also impacted by the pull of gravity, donning procedures should start at the top. Employees can then work their way down. While each company’s donning procedures may be unique to its specific needs, it’s a good idea to adopt a head-to-toe procedure to prevent contaminants from falling and settling on cleanroom shoe covers

A quiet cleanroom doesn’t just boost productivity; it also has the power to reduce contaminants. Consider the fact that loud speaking of just 100 words (less than a minute of normal conversation!) can produce up to 250 particles of saliva. Of course, there are also some contaminants which may not be avoided, such as coughs and sneezes, which produce roughly 5,000 and 1,000,000 saliva particles, respectively. What’s a simple way to limit contamination from saliva particles in your cleanroom? Wear a face mask designed for Cleanrooms.

Taking a pen from outside the cleanroom into the critical work environment might seem harmless, but employees who do so will also unintentionally bring a plethora of contaminants inside with it. Not only should you have cleanroom pens, cleanroom notebooks, and any other tools or instruments designated specifically for cleanroom use only, but you should also make sure they’re compliant with your standards. In other words, the supplies you’re using should also have been produced in a cleanroom environment.

After employees enter and exit cleanrooms, encourage them to take an extra moment to ensure doors are tightly shut. It’s a good practice to make sure the door leading to the changing room is also closed before the cleanroom door is opened to prevent additional particles from making their way into the buffer area. In fact, you can further eliminate the spread of contaminants by separating your gowning room into three distinct areas. One for the non-sterile space directly outside of the room, where employees can keep personal items and clean shoes. The second space is the sterile “dirty” area, where employees prepare for gowning. Finally, the last space should be designated for gowning and taking final preparations before entering.

The more rapidly movement occurs inside the cleanroom, the more particles will be given off. To combat excess contamination, employees should move slowly and deliberately as they approach work stations. They should also be encouraged to enter and exit cleanrooms slowly.

By incorporating these tips into your cleanroom protocol, you might be able to significantly reduce the number of contaminants inside. You can find cleanroom documentation, cleanroom disposable apparel, and more supplies suitable for cleanroom use online through Harmony Lab & Safety Supplies. If there’s a specific item you need help with, a product specialist will be happy to assist you.

Welcome to Harmony Lab & Safety Supplies – protect you and your workforce with Harmony. Founded in 2006 in the state of California, we are a master supply distributor for scientific, industrial, and technological environments. On this blog we provide information from our over 15 years of experience in business and decades more combined experience among our staff.